In 2016, Alpha Rho decided to make a change—a change in our sustainability initiatives that will help us become an industry leader for manufacturing companies interested in renewable energy.

After completing a rigorous cost benefit analysis, we decided to up the ante on our commitment to the environment and social issues. So, in July of 2016, Alpha Rho became more than just a manufacturer of plastic boxes, we became a producer of solar energy. This transition was made possible by New England Clean Energy, the company that installed 745 Canadian Solar 320-watt panels, with SolarEdge optimizers, on the roof of Alpha Rho’s 36,000-square-foot facility. This new system produces 238.4-kilowatts of power and has truly revolutionized our energy usage.

What does 238.4 kilowatts of solar power mean for our company? For starters, it drastically reduces our electricity costs. The system produces 80 percent of the power needed to run the company’s manufacturing, warehousing, and administrative operations, thus lowering Alpha Rho’s dependence on the electricity grid. This new power production is forecasted to save Alpha Rho more than $1.6 million in electricity bills by the year 2040. It also provides Alpha Rho with additional revenue in the form of Solar Renewable Energy Certificates (SRECs). It truly a win-win for the company—and our customers—as we’ve successfully reduced operating costs while sourcing a new revenue stream. 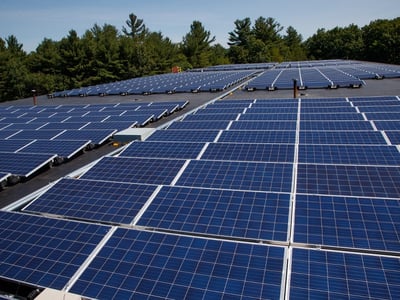 Good for the Environment … and Business

While solar energy provides a great benefit to Alpha Rho—and it’s just plain good business—the environment is the greatest beneficiary of this project. Each year the solar panels reduce the amount of carbon dioxide released into the air by 412,800 pounds. This remarkable impact is the equivalent to removing 39 cars from our roads or planting approximately 150 acres of trees. We hope this success inspires other manufacturing companies to commit to putting the environment at the forefront of their business operations.

As of July 2018, Alpha Rho’s state-of-the-art solar panels have saved the release of over 800,000 pounds of carbon, or the equivalent of planting around 20,000 new trees. Our enthusiasm about this has spilled over, and it’s not the only facet of Alpha Rho’s environmental scope. To expand our environmental impact, we’ve also partnered with local waste and recyclable materials companies that enable the recycling of corrugated cardboard boxes. In addition to recycling corrugated boxes and used machine oil, Alpha Rho also regrinds our plastic scraps into non-processed material and re-molds it, which allows plastic parts and scraps to be re-utilized.

Alpha Rho’s continued use of solar, combined with various recycling initiatives, makes it one of the “greenest” plastic box manufacturing companies in New England. We are happy to be part of the ever-expanding green energy business in Massachusetts. It not only helps us run our plastics molding plant efficiently, but it is also the right thing to do. Whether it’s through recycling 90 percent of our waste, signing up to purchase “green power,” or manufacturing biodegradable green plastics, Alpha Rho is doing our bit to make a big-picture difference.

As the largest manufacturer of high quality rigid plastic boxes in New England, Alpha Rho has been a leading supplier of injection-molded plastic boxes, with a reputation for providing dependable plastic packaging solutions for over 50 years. Our custom rigid plastic boxes—compartment, hinged, friction fit, custom shapes—are used extensively in multiple industries, such as retail and hobby, food and confectionery, medical, and industrial. Contact us for recommendations, orders, and assistance finding the perfect look and fit for your products.